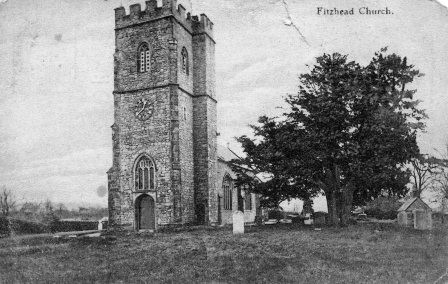 The earliest known history of the Fitzhead area dates back to Neolithic times (around 4000 BC) and evidence of occupation has been found from the Stone Age, the Bronze and Iron Ages through to Roman times. After the Romans left the Saxons founded Wiveliscombe and Fitzhead, and in 1049 Edward the Confessor granted the Manor and the ancient Hundred of Kingsbury to Gisa, Bishop of Wells, last of the Saxon Bishops.

The Bishop retained these lands after the Norman conquest in 1066, and in 1085/6 Wiveliscombe and Fitzhead is listed in the Domesday Book. It was originally called Fyfhide which means five hides – a hide being about 100 acres which was presumed sufficient to support an average family for a year.

A chapel existed in Fitzhead prior to 1090; it was ordained in 1262 and the Vicar of Wiveliscombe was given a cottage (or vicarage) in Fitzhead to live in.

Fitzhead has been a farming village for centuries. The 15th Lord Sommerville (who owned Fitzhead Court and became President of the Board of Agriculture in 1798) introduced Merino Sheep from Spain into Britain and, amongst other developments, invented the double furrow plough. He established experimental farms at Dean Farm and Manor Farm to test the most economical and profitable ways of farming and cultivating the soil.

On the death of the Sommerville line, the estate passed to Bishop Beadon, and then to his son Richard. He sold most of the estate at auction but he retained Fitzhead Court and 87 acres. In 1840 he sold this to Lord Ashburton (Alexander Baring the banker), MP for Taunton. All the houses and every acre of land in the village were owned by the Ashburton Estate (except for the Rectory and Church Glebe lands and a few fields), and most of the villagers were tenants. In the 1890s Barings Bank was in danger of collapse and the Ashburton estates were sold at auction. Many of the villagers were then able to buy their own houses and land. In 1985 the Court was sold to George Stanton Wing and some lands (including the Tithe Barn) was sold to Simeon Berry, JP. Berry died in 1908 and the Tithe Barn was sold for £100 to the Diocese of Bath & Wells for use as a village hall.

In the past the village had its own smithy and a forge, and red sandstone and limestone were quarried. It also had a school (dating back to 1787), a shop, a butcher’s, an old Post Office, a Petrol Station, 3 shoemakers, and at one time there appear to have been about 7 pubs in Fitzhead! Only one remains now.

Mr Coe was the last blacksmith in the village. He was commissioned to build the gates for the National Memorial Park in West Virginia in the United States. They were shipped out of Bristol and it is said that they had great difficultly getting them up the lanes at that time!

Many of the remaining old Fitzhead houses were built in the late 16th or 17th century. Information about listed buildings in Somerset can be found on the British Listed Buildings website. There was once a Poor House for destitute people at the back of the church (now called Welches cottage).

St James’ Church was originally called St Mary Magdalene. The exact date of the church is unknown. The style is Early English. The oldest part is the 15th century tower; the remainder of the building was pulled down in 1849 and the nave and the chancel rebuilt in the same style from the old materials. A vestry was added in 1863 and the north isle in 1887.

In 1849 the 15th century Rood Screen was placed at the west end of the church, but in 1900 it was returned to its correct place at the entrance to the chancel. The well-known church architect, Mr F Bligh Bond, FRIBA, writing of the “unique” screen at Fitzhead, says that it “could not be matched anywhere, the wonderful groining and tracing being equal to the work on the Henry VII Chapel at Westminster”. The most striking feature is the great gap in the centre. The Old Vicarage was originally sited on the North West side of the churchyard, but this was pulled down in 1903.

The churchyard has a 14th century cross. Only the base and part of the shaft of the original cross remain. It was restored in 1908 when the shaft carrying the lantern top was extended to its original height. The lantern consists of a four-sided sculpture; the recess facing west contains a carving of the Crucifixion; on the east is a seated figure of the Virgin and Child; on the north is a figure of St James the Great (the patron saint of the church); on the south is the figure of a bishop.

The lych gate was built by the Rev Wallis around 1903 when he also planted the avenue of yews. There were stocks between the lych gate and the Tithe Barn until the late 1950s, and a set of fixed handcuffs were secured to the church walls for those locals in need of restraint.