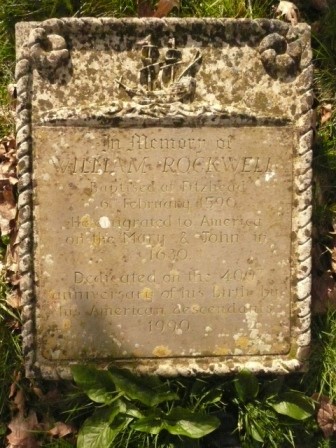 In early Fitzhead records there is a record of William Rockwell, his wife Miriam (nee Wyke), and their son John who was baptised in 1563.

John Rockwell married Honor Newton in Fitzhead on 19 July 1585. Their children were Richard (d 1637), John (baptised 5 July 1588), William (baptised 6 February 1590), Roger (baptised 31 May 1594) and Jane (baptised 1596). John and Honor lived in Dorchester in Dorset for a while, but it is thought that they returned to Fitzhead and lived at Washer’s Halfyard for several years before their sons emigrated to the USA. John Rockwell, the father, was buried in Fitzhead on 23 February 1636, and Honor was buried 21 August 1637.

William Rockwell married Susannah Capen on 14 April 1624 at Dorchester in Dorset. They sailed with their children Joan (b 25 April 1625) and John (b 17 July 1627) on the ‘Mary and John‘ from Plymouth on 20 March 1630 and arrived in Dorchester, Massachusetts after a 10 week journey. (Massachusetts was at that time an American colony of Britain). William and Susannah helped to establish the new settlement and church of Dorchester, where William became Deacon. In 1637 the Rockwells moved to Windsor, Connecticut, and William died there on 15 May 1640. Susannah married Matthew Grant in 1645 and died on 14 November 1666.

Two Rockwell memorials were dedicated in 1985 during the first ‘Mary and John’ tour in honour of the 400th anniversary of the marriage of John Rockwell and Honor Newton in Fitzhead. One was an engraved bench in the churchyard, and the other was the planting of an American Oak Tree.