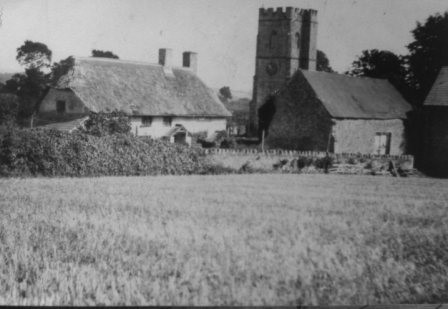 Dating probably from the middle of the 14th century, the Tithe Barn was believed to have been the Church House where dignitaries would meet, and the Parish Church business was conducted (including the brewing of the strong Church Ale). There are records in the Somerset Archives showing details of tithes collected from the Parish.

The Bishops of Bath & Wells owned much of Fitzhead from the time of Edward the Confessor, until 1827 when ownership passed to Richard Beadon by an Act of Parliament. Richard Beadon sold these lands to Lord Ashburton in 1840. In 1895 Fitzhead Court was sold to George Stanton Wing, and the lands (including the Tithe Barn) was sold to Simeon Berry, a Justice of the Peace for the county and Head of the firm of Messrs. Berry and Sons, woollen manufacturers of Ashburton. Berry died in March 1908 and his trustees sold the Tithe Barn back to the Diocese of Bath & Wells in 1909 for £100 who then adapted it for a Church room for classes, concerts, Sunday School and a club.

The large double barn doors to the south wall (through which the wagons had passed from the road to discharge their loads of hay, corn and flax for the Parson’s tithe and so out through similar doors on the north side to cross the churchyard to the road) were converted into windows and a new door with a porch was made at the west end with a window over.  An inglenook open-fireplace was added, and the building was thoroughly renovated.  At one end was a fixed stage, allowing for seating of 150 people.  A gift of a large clock was donated by Mr. Scott, a clockmaker of Taunton.

The newly-adapted Barn was opened on 1 February 1910 by the Archdeacon of Taunton, and on Wednesday, 2 February the Rector invited all the men of the Parish to a Smoking Concert preceded by a Meat Tea.

A mens’ club was formed which met every evening in the week except Sundays. It was fitted with a billiard table, darts and other games, also magazines and papers were provided for the more studious members.

In 1984 it was jointly leased to the Tithe Barn Management Committee (the Administrative Trustees) and The Fitzhead Parish Council for a period of 56 years (ie until 2040) for use as a Village Hall. The Lease requires that the Tithe Barn is used as a Village Hall and made as accessible as possible “for use by the inhabitants of the Parish of Fitzhead without distinction of political, religious or other opinions including use for meetings, lectures and classes and for other forms of recreation and leisure-time occupation with the object of improving the conditions of life for the village”.

The interior was renovated in 1975, when the stage was removed, and the kitchen added. In 1979 3 buttresses and steel ties were added to stabilize the South West wall of the Tithe Barn in 1979/1980 (Planning permission 17/79/0002 and 17/79/0004). In 1983 the mezzanine area was created with stairs and balustrade (Planning permission 17/83/0004). A new roof was put on the Barn in 2010 with the aid of grants from Taunton Deane Borough Council (now Somerset West and Taunton Council) and Somerset County Council.

Historic England describes The Tithe Barn (Monument No 189212) as “in good condition but has been extensively altered with the conversion to a Village Hall. All the roof timbering is modern in addition to the insertion of modern windows and doorway.” It is not a listed building, although The Fitzhead Conservation Area Appraisal document states that, “Despite the changes that have partly disguised its origins, the barn’s appearance, construction and location in the corner of the churchyard remain of interest as having some architectural interest.”